Surreal Encounter in Budapest, or The Art to Be Blind and Deaf

I experienced a surreal scene in Budapest. I was invited to take part by the Czech cultural institute in Budapest in a panel entitled “Václav Havel European Dialogues” on the relevance of Havel’s essay The Power of the Powerless in our digital age. Martin Palouš was another one of the panelists. Palouš, former signatory of Charter 77, is a member of the ÚSTR board which appointed Ladislav Kudrna as director in February – an appointment which took place at a time when my application was discarded because the Czech ministry of the Interior could not confirm quickly enough that I had no criminal conviction in the Czech Republic – even though the urgency of this verification is somewhat dubious considering I had been working at the Institute for the previous nine years.

Palouš and I shook hands before the panel. I joked that I probably shouldn’t be doing that, and he was taken aback – why not? Because, I explained, you are firing me from my job right now. He was surprised, as he seemed to have only vaguely heard of my being fired from ÚSTR and he didn’t feel remotely implicated. “But you are a member of the Board”, I reminded him. He still couldn’t see much of a connection.

I came to realize in the course of the debate that Mr Palouš doesn’t see much of a connection with anything at all. Since we spoke of democracy in Central Europe after 1989, I of course reminded my current predicament – I was fired from ÚSTR in October 2022 because newly appointed director Ladislav Kudrna, as he complacently explained to Barbora Tachecí in a talk show on Czech public radio, didn’t see how I could work there while “going against the legal mission of the institute” as a “revisionist historian”, a remit that apparently included “denying the crimes of communism” and “supporting the hybrid war led by Putin” because “everything is connected.” I have never denied the crimes of communism and my estimate is that Vladmir Putin is a war criminal who belongs in jail, while my “revisionist views” are actually directly inspired from Havel’s The Power of the Powerless, but Mr Palouš still had no idea how any of Kudrna’s purge could relate to him (or to democracy) in any way. He kept repeating he “believes in dialogue.”

I believe in dialogue, too, but dialogue is a rather moot notion if the discussion partners are blind and deaf. While Mr Palouš can’t be bothered to see a problem, nine members of the Institute are being fired by Kudrna and one is leaving this month alone. Ondřej Vojtěchovský, my former boss at ÚSTR, was relieved from his function of editor-in-chief of the institute’s journal Securitas Imperii in the midst of preparing a special issue only a few days after he signed the petition protesting my dismissal, which is a strange coincidence to say the least.

Mr Palouš can repeat empty phrases about democracy and dialogue all he wants, but as a former signatory of Charter 77 he should know that to pretend not to see what is going on is not a neutral occurrence: it is an active strategy, and one that is that is not particularly glorious. 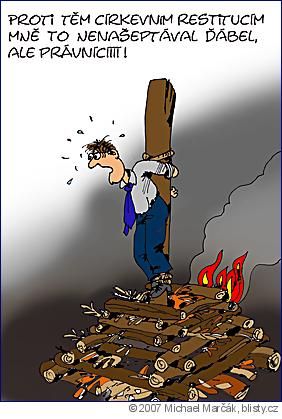