Jan Rychlík: There is no morality in history

Let us consider, using the case of Czech history, how we construct a mythological narrative about our own national past. Of course it is always pointed out that history is being written by victors only. As Michel Foucault says, "Each discourse is a power discourse." Authors of any narrative always try to manipulate you to support their personal interests.

Historian Jan Rychlík has recently published an introductory chapter from his new book on Czechoslovak history 1945-1989 in a Czech newspaper. He has also published it in his blog, here (in Czech)

Let us summarise his argumentation:

(Jon Snow from Channel 4 News once said: Don't you know that what we present to you in our news broadcasts is based on our subjective choice? Do we have to place a warning title alerting you to this in each of our broadcasts?)

Most modern European nations were formed in the 19th century. This is when these nations constructed their own national narratives. These are basically narratives about how great their national past was. A majority of citizens in each of these nations then identify themselves with such a narrative. This national narrative is then codified and set in stone by means of the teaching of history in schools. From the point of view of this narrative, the present looks like a logical outcome of the past.

But since history does not have the end, the so called "contemporary history" is gradually also being included into the received national narrative. However, this  creates an insurmountable problem: When you try to construct a historical narrative using events which people have personally experienced and they remember them, these personal experiences are often in conflict with the attempts to create a unified national narrative.

The consensual assessment of recent history functions as a justification for the currently ruling power wielders.

The 1948-1989 Czechoslovak communist regime saw itself as a victory of "good over evil". But it was impossible for historians during this era to write about contemporary history because the ongoing conflicts and events simply did not fit the official Marxist-Leninist concept of history.

There were of course different views of Czechoslovak post-war history. The Czech emigrants in the West saw the February 1948 communist take-over as a putsch which destroyed the democratic system in Czechoslovakia, introducing a rule of terror.

Each new regime aims to legitimise itself by condemning the previous regime. After the foundation of independent Czechoslovakia in 1918, the rulers created the myth of "the subjugation of the Czech nation in the Austrian Empire, which had lasted for 300 years". The communist regime after 1948 strongly criticised what it saw as the poverty and unemployment in interwar Czechoslovakia. The same happened after the fall of communism in 1989. Briefly, the post-communists tried to continue the reforms of the 1968 Prague Spring, but that narrative was soon discarded and replaced by a total condemnation of communism - this was a narrative which was very close to the interpretation of communism by the anticommunist post-1948 emigration. But of course, it was modified to fit the needs of the new post-communist establishment.

But at the beginning, from 1948 onwards, the communist regime in Czechoslovakia did have a substantial support from a large percentage of the population. People from the lower classes as well as Czech intellectuals did believe that the nationalisation of all means of production would solve all the problems of the world.

The first five years of the communist regime in Czechoslovakia were marked by a truly brutal repression. There were no civic liberties, there was no law and order. But, paradoxically, it was in this period when the regime enjoyed the support of a large part of the population. Most people did not feel that there was no freedom and no democracy. Most working class people did remember poverty and unemployment in the interwar period and also they remembered the horror of the Nazi occupation during World War Two. Democratic values were not particularly important for people at this time. A Czech worker in 1949 did not think it was a problem that he could not write a letter criticising the communist government and have it published in a newspaper. Workers did not write letters to newspapers and usually did not even read newspapers. Workers were not particularly bothered that they could not travel abroad because prior to communism they would not have had money to travel abroad anyway. They, however, did appreciate the security of employment under communism as well as inexpensive trade union holidays in state-owned hotels in the Slovak mountains. If they were intelligent, they could now study and rise to become members of the country's ruling elite.

But the active support for the communist regime from a majority of the population did  not last long because the regime continually narrowed down the number of its supporters in society. First, the regime lost the private farmers who were being forced to give up their land and to join cooperative farms. Then the regime lost the craftsmen because the regime took away their businesses. Then the regime lost most of the working classes when the so-called "currency reform" of June 1953 took away all their savings. The regime also lost the support of left-wing intellectuals because they discovered that there was no freedom for artistic experimentation. The regime also lost religious believers when it started suppressing religion.

Nevertheless, as historian Muriel Blaive has shown, in 1953-1956, the regime managed to neutralise the hostility of the population by reducing retail prices, cancelling its second Five Year Plan and by redirecting some of its investment into consumer industry. It also stopped brutally pressurising farmers to join collective farms. In the 1960s, the regime even won over the cooperative farmers by raising their living standards by subsidising agriculture. Paradoxically, the cooperative farm employees were still supportive of the communist regime in 1989 when everyone else had abandoned it.

In 1968, during the Prague Spring, the communist regime again received massive popular support when it presented a reformist programme which was aiming to merge the advantages of socialism (most people still supported socialism) with the advantages of western-style democracy.

When in 1964, Brezhnev replaced Khrushchev in Russia, the communist leaders started saying that the transition from the preparatory stage of communism, ie. socialism, would last for a very long time, even for several centuries. The vision of the arrival in communism thus receded. The post-1968 invasion regime of Gustáv Husák absolutely adopted this argument. It said to the citizens: "Neither you nor your children or even your grandchildren will live to see communism. Just live in the present. We will secure a decent standard of living for you and in return for this, you will avoid politics." The post-invasion regime of the 1970s and 1980s was really conservative: its ideal was a petty-bourgeois existence with a relatively decent standard of living. Husák's leadership was contented if the citizens expressed their support for the regime only formally. The regime did not care about what people really thought about it.

Thus, in the 1970s and 1980s, the system which was based on social corruption of the widest strata of society functioned without major problems. The fall of communism in Czechoslovakia was only the result of a change in geopolitical conditions.

While the perception that  the forty years of communism between 1948-1989 in Czechoslovakia was an era of unmitigated terror prevailed for the first ten years or so  of post-communism, some contemporary Czech historians are now disputing this historical narrative, pointing out that the situation was much more complex.

However, as some observers point out, the narrative that communism was unmitigated terror is still peddled by many media in the Czech Republic and some people are afraid to say anything else in public.
Česká republika
0
Vytisknout
2222 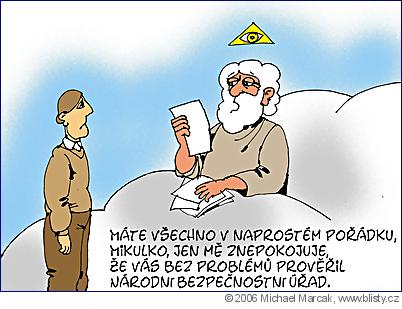