The EC Vice-President Věra Jourová: EU should only give money to Hungary if the Hungarian government fully upholds the fundamental EU principles

čas čtení 3 minuty
In an interview with Britské listy to be broadcast next week, Věra Jourová, the Vice-President of the European Commission, says that the EU should only provide money for Hungary if the Hungarian government fully upholds the fundamental EU principles.
Here is the transcript of the interview:
Interviewer: It is evident that some EU member states do themselves seriously flirt with "alternative reality". The Hungarian government, its top representative Viktor Orbán often commits such offences. I do recall their map of the alleged "no-go zones" in the European Union, which was shown to be untrue many times, which was criticised many times, people have been pointing out that this is dissemination of disinformation from official sources. From official sources to Hungarian society. In connection with what is now happening in Hungary, Viktor Orbán is trying to exclude parliament from the division of democratic powers, so that he could rule on the basis of issuing decrees. How do you see the role of Hungary and how do you see the current situation in Hungary? And what will the European Commission and you personally want to do about it? So that the situation changes. Because Hungary looks like a great risk for the European Union.
Věra Jourová: It is a risk because this is a country which,  without reservation, is sending a message to the rest of Europe saying "We do not respect the fundamental principles which you hold dear".  Hungary sends this message to the older democracies in particular. So for me this is a hard nut to crack. I constantly bear in mind that Viktor Orbán is successful in talking to his voters, a large part of Hungarian society trusts him and votes for him, and his support has increased now in the Covid era because people trust him that he will manage to control the pandemic by his sharp managerial style. At the same time, this government and Viktor Orbán are deeply distrusted by the European Union. It is confusing, consider the current consultation which he has kicked out, no one understands why he does this, because this creates problems, it unnecessarily creates divisions in Europe and it unnecessarily incites anti-European attitudes in Hungary. Yet the Hungarians have traditionally had a very positive attitude towards the European Union. Paradoxically.

So, what do we do with this? Viktor Orbán uses a number of instruments which distance Hungary from the basic European Union principles. So far, he has not paid any price for this. I am of the opinion that we should be stricter in linking the disbursement of money to Hungary with  the principles that we expect to he adhered to. So this is being discussed now. Orbán says that there are no problems and that Hungary is a state that respects the law, so it should not be a problem for him to accept this  principle. But there are many other possibilities, whether they are legal or diplomatic. We must constantly tell not only Viktor Orbán, but also the Hungarians: "You are doing things which the rest of Europe considers to be very strange and we do not like it." So I do not have an immediate solution. And I am really sorry that this is happening.

The video of this interview (of which the above is a transcript excerpt) has now been published:
It is in Czech with English subtitles.


See also:
What will the European Union do against disinformation on the internet?  (An interview in Czech with English subtitles) 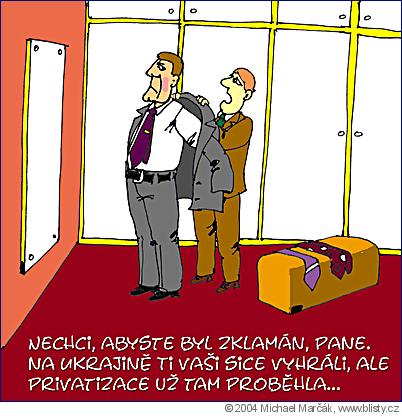